The process of writing “nigger” started with an arranged meeting between Gregory and a young, New York Times sportswriter named Robert Lipsyte. The publisher E.P. Dutton had sent many other potential collaborators, however, Gregory didn’t click with any of them. 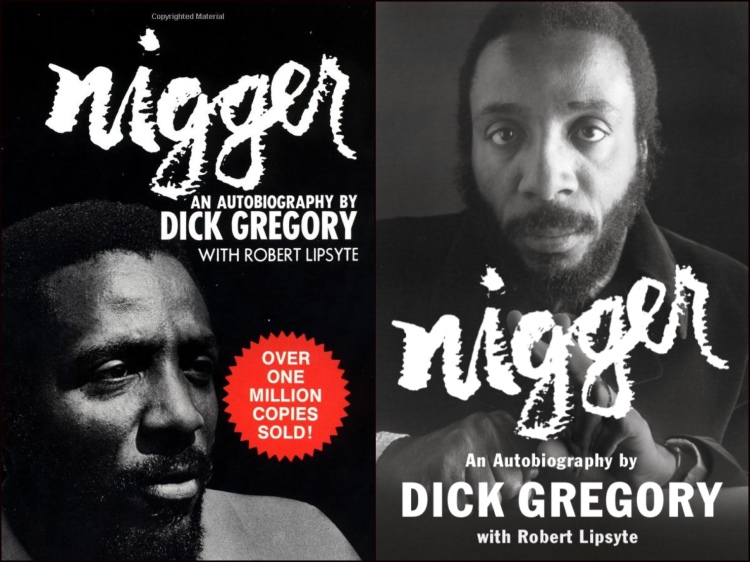 The project began just a couple weeks after the March on Washington. Lipsyte first met with Gregory on September 15, 1963, the day after the horrific Birmingham, Alabama 16th Street Baptist Church bombing.  It was a truly inhuman attack on innocence. Four little girls,

Gregory was deeply disturbed by this hate-induced attack. He recounted his outrage, his anger and heartbreak.   Lipsyte traveled with Gregory with a notebook and tape recorder in hand for several months. Much of the writing and recording took place in hotel rooms late at night, after Gregory had finished shows or rallies for the evening.

Gregory said he initially wrote the book for white people to learn about his experience– what racial and economic exclusion can look like in the experience of someone they’d already embraced. He felt Black Americans didn’t need to know about his youthful challenges, they’d lived them too. And yet, the book ascends. It becomes very important and respected throughout a wide cross-section of Americana. It has been required reading at schools and universities. In addition, sections like ”Shame” have regularly been featured in textbooks for children and young adults.

When first published in October of 1964, the naming process was purposeful and deliberate.  Gregory named the book ”nigger”, not to be provocative, but as an act of defiance. He knew his defiance would negatively impact sales and limit the marketability of his autobiography.  However, he was more concerned with being a change agent. Dick Gregory was a spiritual trillionaire. Money never motivated or guided his decision. He was more concerned with the act of taking the proverbial brick being used to beat Black folks and claiming the ownership of that brick.  He was most likely uncertain how this brick would go on to be used, but certain white folks would lose their monopoly on it.

Gregory utilized the word nigger as a tool, intentionally—he had fun with it and made fun of it. He would work the book’s title into his shows and lectures. He’d tell jokes about ”nigger” relentlessly, slowly but surely chipping away at the word’s sting and its bite.  We almost need to deconstruct the title and reconstruct it for today’s audience.  The word nigger has changed dramatically since 1964, which in itself is a success. This collective change was a preferred and desired outcome. No one stops saying a word because they’re told not to say it.  Word use changes when the effect or working definition changes.

For us Gregory children, we routinely had to throw folks a lifeline as they started to stutter and struggle while mentioning they’ve read our father’s autobiography.  “Hmm, what’s the name?” while pretending to engage in deep thought to recall the title.   Today the word nigger has grown exceptionally complicated and tricky to navigate around.

Today, some five decades later, the title remains provocative, but its usage no longer defiant.  This iconic autobiography is so much more than its name.  With well over a million copies sold, an uninterrupted 55 years on book stands, the collective message is just as relevant today.  The intentions behind the title were successful.  Regardless of your position on the word, its impact has dramatically lost its searing bite.  The word was once an atom bomb that, once dropped, had crippling effects. Today, the word is more like a rusty musket—a rusty musket that angers elders when youngsters are irresponsible with it, like risky gunplay. A nuclear bomb reduced to a limited effectiveness one-time projectile. A quantum leap by anyone’s analysis.

As we prepared for this new edition, the Estate didn’t want the title to be a bigger take away than the book’s content.   However, anyone who knows Gregory knows he hated when folks would say “the N word” instead of nigger.  This annoyed him. He felt as though we were behaving like children.  He’d say “no one’s ever been raped and said they were ‘R worded’. Truth loses its impact with nicknames.”  We chose not to utilize a nickname, we chose to refresh the original cover. In today’s digital age, images are omnipresent.  We want this book’s cover to have the deep impact that Gregory originally intended, for it to be shown and highlighted everywhere.  This autobiography holds no punches. Today, its collective relevance knows no boundaries and remains very necessary. The fact that this book remains a relevant and necessary lens is shameful. Over 50 years later, we still have significant racial and social economic injustice. Racism is ugly and corrosive. It undoubtedly adversely impacted this great nation’s potential and global standing. The word nigger is a stain on America, a stain that still needs to be cleansed. America continues to have a race problem. Our nation can not begin to fully heal from its atrocities until it acknowledges and atones.

Dick Gregory’s, “nigger” is a reminder. It shows despite a nation’s best efforts to marginalize, the human spirit is bigger than collective prejudice. It shows that truth does not need to be validated by ignorance. We can do better, we must do better. We owe it to all of the marginalized who were unable to slip through the cracks. The world is a better place because Dick Gregory ran fast and talked fast, all the way to a prominent seat at the nation’s table. And once comfortably seated, he never stopped advocating for that little marginalized boy born into utter poverty in 1932’s segregated St. Louis, an unwavering voice of the people.

Dick Gregory said, ”I didn’t learn shame at home, I had to go to school to learn that”. He then went on to take this nation to school with relentless multi-generational activism. This book continues to bring power to the people by speaking up for all Americans.

I am proud and excited to reintroduce to you this iconic autobiography.  Please read, share and reread. This is a story of perseverance, survival against all odds and a lifelong commitment to leveling playing fields, even on fields you have no desire to play on.

The world needs more love and less hate. As Gregory would say, it is not enough to be loving if we are not lovable. With love, universal appreciation and on behalf of the Estate of Dick Gregory, we thank you for being a part of this journey.

Dr. Christian Claxton Gregory (Bio) Christian Gregory is the eighth child of Dick and Lillian Gregory. Born in Chicago, he was raised on a 1,000 acre farm in Plymouth, Massachusetts, where the pastoral setting and lifelong lessons in wellness spurred his interest in physiology and the mind-body connection. After graduating from Morgan State University, he earned a Doctor of Chiropractic degree from Life University in Atlanta. Dr. Gregory practiced in Washington for twenty-five years, caring for DC natives, leading entertainment figures, and friends in the movement including Rosa Parks, Coretta Scott King, Betty Shabazz, Dorothy Height, Cicely Tyson, and Stevie Wonder. When Dick Gregory decided to resume an active speaking and entertainment schedule, he became his father’s manager. Together they formed Dick Gregory Media, Inc. in 2015. Dr. Gregory’s unique combined experiences in patient care and entertainment management fostered the desire to develop the linkages between activism, communication, the performing arts, and physical well-being. To that end, he established Tower Hill Farm Health & Wellness and Tower Hill Farm Entertainment. Since his passing in 2017, Christian Gregory has managed his father’s estate and intellectual property, and has successfully guided the development of other projects on his father’s life, including the stage play TURN ME LOOSE and the film THE ONE AND ONLY DICK GREGORY. View more posts

2 thoughts on “— The backstory: how Dick Gregory’s acclaimed autobiography “nigger” came to be —”